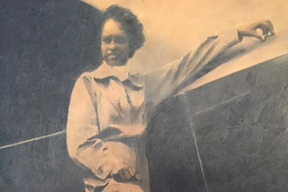 Azellia White was one of the first African American female licensed pilots in the United States and the first in Texas. She trained with the Tuskegee Airmen from WWII and then flew with them after the war.

When I read the articles about her, I was upset I had never heard of her before. Someone needs to rewrite our children’s history books so our girls can learn all about the amazing female trailblazers who opened paths for the rest of us.  My youngest granddaughter wants to be a zoo keeper because of her obsession with Jane Goodall, someone they do teach about in school. Maybe she’ll become a conservationist or wildlife biologist. Whatever, a publicized hero inspired her.

Annie Sullivan of Helen Keller fame taught me to not give up on people resistant to learn. I read her biography at least 30 times as a child.  Without her and what she taught me about perseverance, RFBC wouldn’t have lasted the 14 years it did. Girls need woman heroes like Azellia White.

As a young girl, all our neighbors were old widows.  Their husbands had died in their 50’s and these women had to become self-sufficient. Social Security was new and the only money they could count on was money they made themselves. The woman who lived next door to us was in her 80’s and lived in a shack without electricity and water.

These women didn’t complain about their lives or lament over the injustice of becoming widowed, they spoke of fun times or peculiar situations and they loved to laugh. My favorite was the 80-year-old next door. I still keep a photo of her when she was in her 30’s on my mantle. Takin part in the roaring 20’s she married a drunk. In the 1930’s she had the confidence to divorce him. She started her own business, a novelty store in Boston, to support herself and was able to save money to support her through old age. All on her own. Another one of the women made slipcovers from her home. I would sit by her side as she worked and she would tell me stories. They all had amazing stories.

So what does this have to do with Azellia White and Thin Brain Training? Everything. I learned from these women that a girl could survive on her own, that she could be self-sufficient, that we weren’t weak and powerless. All hidden knowledge back in the early 60’s.

When I look back on my life, every hero of mine was an independent woman. A woman with the ability to be self-sufficient and who faced life with the idea that it couldn’t beat her. They taught me regardless of hardship you have to keep doing and being because there was no other way. Giving up was not an option. They taught this to me through their humor and how they lived their lives.

This video is a tribute from Azillia White’s godson

I had never heard of Azellia White until the news announced her death (two months after it happened). There isn’t a lot of information about her. Click here for the best article I found about her. Even when a line-up of Female American Aviators came up on Google, her photo wasn’t there, but I saw it in her 106-year-old face. I knew that woman. Everything I look for in a hero was there. Strength, fearlessness, self-love. She lived proudly with self-confidence and grace.  “I just had a good time in life,” she said at 105. That is how she is relevant to what we do here at Thin Brain Training. Click here for the CNN article that has the video from when she was 105.

Not Just Girls Need Heroes
Women Do Too!

She is a role model of how to live our lives. Of pushing the boundaries and living life fully. I doubt she ever had a weight problem, but life was full of obstacles at a time when life for a black woman was, well, let’s just say, a lot more difficult than for an over-weight woman today. She wasn’t afraid to step beyond the boundaries of her time. Regardless of the obstacles and the bias towards her because of her race and gender.

I wish she lived in my neighborhood. That as a child I sat by her side and listened to her stories. The things I would have learned. The ability to find joy regardless of what is going on around me, the importance of freedom when in her time the only way she could feel it was when flying. She believed in herself when the common belief was blacks and women weren’t capable of flying. She didn’t bow to others negativity and guidelines as to who she should be, but instead lived by her own standards. 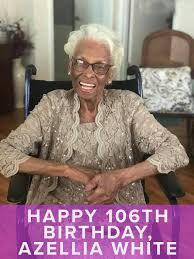 The standout thing in all I read was how she would fly over counties deemed unsafe for African Americans to drive through so she could go shopping or visit her family.  This woman found solutions. Azellia refused the limitations put on her by others’ biases and hate. She should be a hero to every girl out there, every woman struggling to find herself and become the she, she wants to be. To me she epitomizes what we are trying to do in the Me I Want to Be program.

I say if Azellia White could overcome her obstacles and live a life full of good times then we can too.

I don’t know about you, but at 106 when I look back at my life, I want to be able to quote Azellia White and quite irrevokably say: “I just had a good time in life.”

This video put out by the Texas Aviation Hall of Fame when they inducted Azellia White.
I just wonder why they waited until she reached 105!

As a final note, I’d like to thank Azellia White for teaching me to never give up on my dreams and how we are never too old to inspire and change others’ lives.